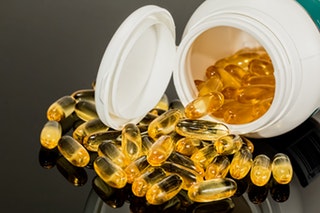 Part 1 in this series outlined the need for antioxidants and how they can protect our bodies from a whole host of disorders and dysfunction. In this post, we’ll review some of the key antioxidants and why you may want to take a variety of antioxidants.

Vitamin C (ascorbate) is one of the most prevalent and least expensive antioxidants out there. In addition to protecting your cells and DNA/RNA from damage, ascorbate is known to regenerate other antioxidants and increase glutathione production. It also enhances immune function, increases iron absorption and is crucial in collagen synthesis, which is an important structural component of your bones, blood vessels, tendons, and ligaments. Vitamin C is plentiful in many deep colored fruits and vegetables; in supplemental form it is best taken as a fully buffered mineral-ascorbate (like Ultra Potent C) or in liposomal form to maximize bioavailability.

Resveratrol is a food-based antioxidant found in grapes, cocoa, red wine and many vegetables. Resveratrol can cross the blood-brain-barrier and has been shown to protect the brain from the damaging effects of free radicals and may reduce one’s risk of developing Alzheimer’s disease. In addition, resveratrol has been shown to inhibit the growth and spread of cancer, lower blood pressure, improve the elasticity of blood vessels and control inflammation. These unique properties make resveratrol a great choice for overall antioxidant protection, and especially good in cases of cardiovascular disease, cancer prevention and to lower inflammation.

Glutathione is the body’s most powerful antioxidant and is found in every single cell in the body. Glutathione is unique in that it must be made within the body from it’s constituent amino acids, including cysteine, glycine and glutamine. Glutathione is often called the “master antioxidant” as it has a unique ability to maximize the performance of all other antioxidants, protects the mitochondria (the powerhouses of the cell) from damage and is essential for detoxification, energy utilization, and preventing diseases associated with aging. Glutathione can be increased through the consumption of cysteine, glycine and glutamine; alpha-lipoic acid, vitamin D, N-acetyl cysteine, B6, B12 and folate; whey protein; as well as by eating sulfur rich foods, including garlic, onions and cruciferous vegetables.

Vitamin A consists of a group of compounds including retinol, retinal and retinoic acid. Some of the carotenoids can be converted into vitamin A in the body, but recent research indicates that this is not nearly as efficient as once thought. Vitamin A is very important to protecting vision (especially night vision), as well as maintaining proper immune function and preventing infection. It can also protect the skin from damage and is vital to maintain skin health.

Vitamin E is actually a collection of many compounds including the tocopherols and tocotrienols. They are identified by prefixes alpha- (α-), beta- (β-), gamma- (γ-), delta- (δ-), and epsilon (ε-). When looking for a vitamin E supplement, it is best to use only the “d-” form and/or mixed tocopherols or tocotrienols; avoid the “dl-” forms as they are synthetically derived and are associated with most of the “negative” effects of vitamin E published in studies. Vitamin E works very well to protect the cell membranes from oxidation, reduces inflammation and can be recycled by other antioxidants, including vitamin C, vitamin A and alpha-lipoic acid.

The carotenoids are a class of naturally occurring pigments that have powerful antioxidant properties. The carotenoids are the compounds that give most vegetables and fruits their vibrant colors and one of the key reasons people are often told to “eat the rainbow”. There are over 700 naturally-occuring carotenoids, including lycopene, beta-carotene, lutein, zeaxanthin and astaxanthin.

Alpha-lipoic acid (ALA) is a fantastic free-radical scavenger that is known to regenerate other antioxidants in the body. In addition, alpha-lipoic acid is both water and fat soluble and has been shown to cross the blood-brain-barrier, making it especially useful for brain health. In addition, it can modify gene expression to reduce inflammation, help with heavy metal removal and enhance insulin sensitivity. ALA isn’t really available through foods, but supplemental forms are easy to find.

The list above is by no means exclusive, with dozens more antioxidants and phytonutrients available that can scavenge free radicals. So how do you choose which ones to take?

First things first – get as many antioxidants as possible through your diet. This means eating and juicing as many deep colored vegetables and fruits (especially deep colored berries, grapes and pomegranates) as possible. Next, augment your diet with a handful of raw nuts, especially pecans, walnuts, hazelnuts and Brazil nuts several times a week. Use herbs and spices in your cooking regularly, including ground cloves, ground cinnamon, oregano, turmeric, ginger, and garlic. And lastly, drink green tea daily as it is loaded with beneficial polyphenolic compounds, like epigallocatechin-3-gallate (EGCG), which is one of the most powerful antioxidants known today.

From a supplement perspective, getting in a blend of water and fat soluble antioxidants is a good idea. At a minimum, I would recommend vitamin C (as fully buffered mineral ascorbates), vitamin E and selenium.

In addition, you can get many antioxidants from food; our next post will show you how.